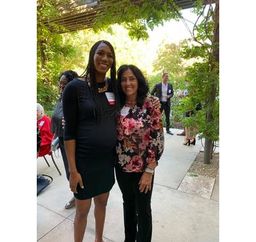 On September 16th, Foluke Akinradewo '05 was named as one of 8 inductees to the 2019 Class of the Stanford Athletics Hall of Fame. On September 20th, former Coach, Lisa Zielinski was there in California to help celebrate her former player!

While at STA, Foluke Akinradewo assisted the Lady Raiders Volleyball Team in their 2004 State Championship v. Venice. As a middle blocker Foluke was known for her power and accuracy. She also played basketball and was a 4x Florida State Track Champion.

Foluke left STA, going on to be a 4 year starter at Stanford, and finishing her college career with the best career hitting efficiency of any NCAA D-1 player. She was a member of the 2012 and 2016 Olympic Games winning silver and bronze, respectively, and today she is a member of the US Women's National Volleyball Team and plays for the Japanese club, Hisamitsu Springs.

Congratulations Foluke! We are so proud!

To view her induction to the Stanford Athletics Hall of Fame, click here!