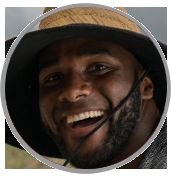 Giovani Bernard was born to Haitian immigrants who showed him that with hard work, anything is possible. Giovani has made it his mission to give back to the country his parents came from, since ascending to the NFL. "It's something I hold dear to my heart."

The Walter Payton NFL Man of the Year Award recognizes an NFL player for his excellence on and off the field. The award was established in 1970. It was renamed in 1999 after the late Hall of Fame Chicago Bears running back, Walter Payton. Each team nominates one player who has had a significant positive impact on his community.

Giovani Bernard
RUNNING BACK
CINCINNATI BENGALS
Giovani Bernard was born to Haitian immigrants who showed him that with hard work, anything is possible. Giovani has made it his mission to give back to the country his parents came from. His work-ethic is rooted in his upbringing in Boca Raton, Florida, where his mother's sudden death when he was seven marked the family's slide to poverty. But his father, who built a dry-cleaning business and then lost it, was able to get the family back on track with 18-hour days as he scratched his career back to life. Giovani insisted on giving back and when he got to the NFL, he started building a school in Haiti named after his mother. "It's something I hold dear to my heart," he said of Jardin Vert De Josette. Giovani has made several trips to Haiti to visit the children at the school and make enhancements, including adding solar panels for electricity and ensuring the school has clean running water. His goal is to make this school a community focal point and a safe haven for the kids.

Giovani became famous for driving a minivan while on "Hard Knocks" his rookie season. Giovani and his mother-in-law, who he borrowed the car from, decided to pay it forward last year and donated the minivan to a Marine who was severely injured in Iraq. E3 Lance Corporal Dustin Hoog came home to Indiana with medals for Combat Action and the Iraq Campaign and post-traumatic stress that has left him 100 percent disabled. With one member of the family working and five children in the home, his old car could not fit the whole family, but they could not afford a new one. That's where Giovani, his wife and mother-in-law came in to help fix up the minivan for the Hoog family.

Giovani launched his foundation in 2014 with the mission to give underprivileged children a platform for success by providing opportunities for education, athletics and lessons in core values that will help support them throughout their lives. The Run Gio Foundation focuses on helping children develop an awareness of the interdependency of the world around them as a whole, and an understanding that they are part of and contribute to that whole. Through education, children not only gain the concepts and knowledge needed to find gainful employment, but develop the attitudes, self-respect and holistic worldview needed to become a positive contributor to the greater society. Giovani is a leader in the Bengals locker room, and his teammates recognized that by voting him a captain for the second year in a row. He signed his third contract with the Bengals in September, which said as much about his character as well as his versatility. The Cincinnati Bengals are honored to nominate Giovani Bernard as their Walter Payton NFL Man of the Year.

Read more about the Walter Payton Award and how you can support Gio: http://www.nfl.com/manoftheyear

Fans are encouraged to participate in Nationwide's 5th annual Charity Challenge, a social media campaign designed to support and promote team nominees. Fans can vote on Twitter by using #WPMOYChallenge followed by their favorite nominee's last name. The player whose unique hashtag is used the most between Dec. 12 and Jan. 12 will receive a $25,000 contribution to their charity of choice, while the second and third place finishers will receive $10,000 and $5,000 donations, all courtesy of Nationwide.