RSS Feeds Subscribe to Alerts
RSS Feeds Subscribe to Alerts
STA Wrestling Reaches the State Finals!
Last year, St. Thomas advanced to the FHSAA State Dual Wrestling Tournament (a tournament that invites all Region finalist teams throughout the state, in all 3 classes, to compete in one location) but fell in the Regional Final to Fort Pierce Central. This year’s team made it a mission to make it back and go further, knowing it wouldn’t be easy.

This year’s run started with the District Duals at STA on January 8th. After receiving a bye in the Quarterfinal round, STA found themselves in a tight match with Miami Norland in the District Semifinals. Leading 30-24, STA won 3 of the last 4 matches to win the dual 48-30. The Raiders went on to defeat Archbishop McCarthy 69-12 in the District Finals. A week later, STA would host the Region Quarterfinal and Semifinal rounds. With multiple starters still out of the lineup, the coaching staff would have to get creative with the lineup for these Region matches. Four wrestlers would wrestle up a weight class, and numerous freshman and sophomore wrestlers would be counted on. Right off the bat, STA was in a hole, trailing 0-16 to Hialeah Miami Lakes. The Raiders would take the next 5 matches, which included 4 straight pins and an important 12-5 win from sophomore Peter O’Neil (152). Yet the team found themselves trailing again, 27-31, going into the last 3 matches. Wins by seniors Noah Lusk (195) and Anthony Mingarelli (220) in the next 2 matches would lock up the dual for the Raiders. A 39-37 win over HML moved STA into the next round against Miami Southridge, who defeated the Raiders earlier in the season. STA would find themselves in another tight dual, tied 19-19 with Southridge after 8 matches. This time, it would be sophomore Adam Jacob (170) and junior Kade Wehby (182) who would ignite a run that started with back to back pins. The Raiders would end up taking 5 of the last 6 matches, rolling to an impressive 49-23 win and a birth to the final rounds of the State Duals in Kissimmee.

The State Dual Tournament begins with the Region Final matches on Friday night, continues with the winners wrestling in the State Semifinals Saturday morning, and culminates with the State Championship matches on Saturday night. On Friday night January 24th, St. Thomas arrived at Osceola High School with its healthiest lineup of the year and ready to take on Okeechobee in the Region Finals, The match-up with Okeechobee would start at the 113 weight class and going into the last 4 matches, STA found themselves behind 24-36. Another rally would be sparked and this time by the seniors. Noah Lusk (195) secured a first-period pin and Anthony Mingarelli (220) earned a 6-5 decision. Tyreak Sapp (285) followed the seniors with a 2nd period pin. STA led Okeechobee by 3 points entering the final match. Junior Carter Bass (106) would take on an opponent that defeated him last year and the winner of this last match would win the dual for their team. After ending the 1st period down 7-3, Bass would come back to take the lead and then record a pin to seal the win for the team. The STA bench erupted in celebration as the team would move onto the State Semifinal match against Lincoln (Tallahassee).

On Saturday morning, STA took on Lincoln and found themselves in another hole but this time the Raiders trailed 12-35 with 5 matches to go. STA would have to win all of the last 5 matches and with bonus points to pull off a comeback. It didn’t look good at first when Sophomore Brock Coburn (120) found himself down 12-1 going into the 3rd and final period of his match. Coburn chose the top position to start the 3rd period, and with 47 seconds left in the match and still trailing, Coburn turned and pinned his opponent, breathing life back into the team. Riding the momentum of Coburn’s big win, senior Michael Sarron (126) and sophomore Ethan Wigutow (132) both recorded 1st-period pins. The STA coaching staff entered the final 2 weights, 138 and 145, down by 5 points and with a big decision to make. All year, the team has weighed in both junior Frank Messina and sophomore Patrick McNamara at 138 and wrestled one of the 2 up to 145 depending on the matchups. This time the decision was made to send Messina out at 138 and he would pin his opponent in the 2nd period. This meant that McNamara would be wrestling up at 145 with the team leading 36-35, and like the night before against Okeechobee, whoever won this last match would win the dual for their team. At this point, all other Semifinal matches in the Osceola High School gym had ended and all eyes were on this last match. The environment was loud and intense. McNamara trailed 2-1 in the 3rd period when he earned an escape to tie it up 2-2, and with 7 seconds to go McNamara scored a takedown to get the win. The Raiders had won the last 5 matches, scoring 23 straight points to complete the comeback, and reach the State Championship match.


STA would take on Tampa Jesuit in the FHSAA 2A State Finals Saturday night. Throughout the State Dual series, the Raiders had won 6 straight duals to reach the championship match. In the last 4 duals, STA was tied or trailing in the 2nd half of those match-ups and each time the team rallied to close out the wins. The Raiders would fall to Jesuit in the finals that night but the State Runner-up finish matches the team’s 2002 State Runner-up finish and only falls behind the 1985 State Championship team. Other wrestlers in the lineup that were crucial to STA making the finals were freshman Michael Syzamnik (113), sophomore Patrick Hauser (152), and junior Skyler Hall (160).

Congratulations to all the wrestlers, coaches, parents, and alumni who helped make this happen and good luck to the team as they start the State Series again on February 20th at STA with the traditional District tournament as individual wrestlers begin their quest to reach the Traditional State tournament at the Silver Spurs Arena in Kissimmee on March 6-7. 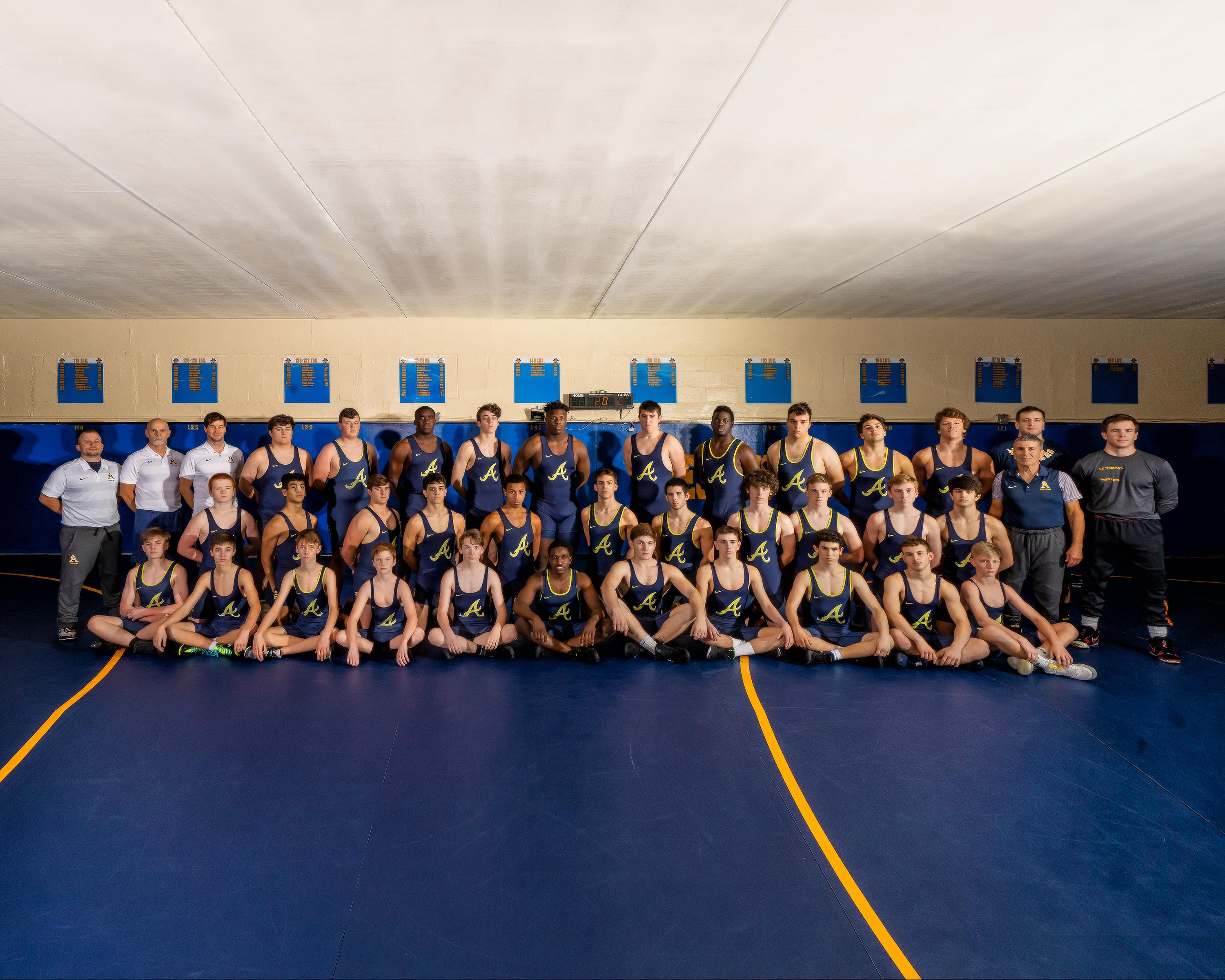